Prospective train users in Spain might want to take note of a new discount train service, Iryo, which has begun operating. An article providing some details can be found here: https://spanishnewstoday.com/third_...ny_in_spain_launches_this_week_1900942-a.html.

We took an Oiugo train last summer from Zaragoza to Madrid. Very inexpensive, but I would compare it to Ryan air. Crowded, very little legroom or room for your belongings. We were glad the train was fast and the time onboard was brief. The regular Renfe fast train was luxurious by comparison. Wonder if this new line will be similar to Oiugo?

The ability to modify bookings is the biggest takeaway for me. Renfe offers changes but only on their most expensive rates. Unfortunately, Santiago is not a destination for any of these new competitors. 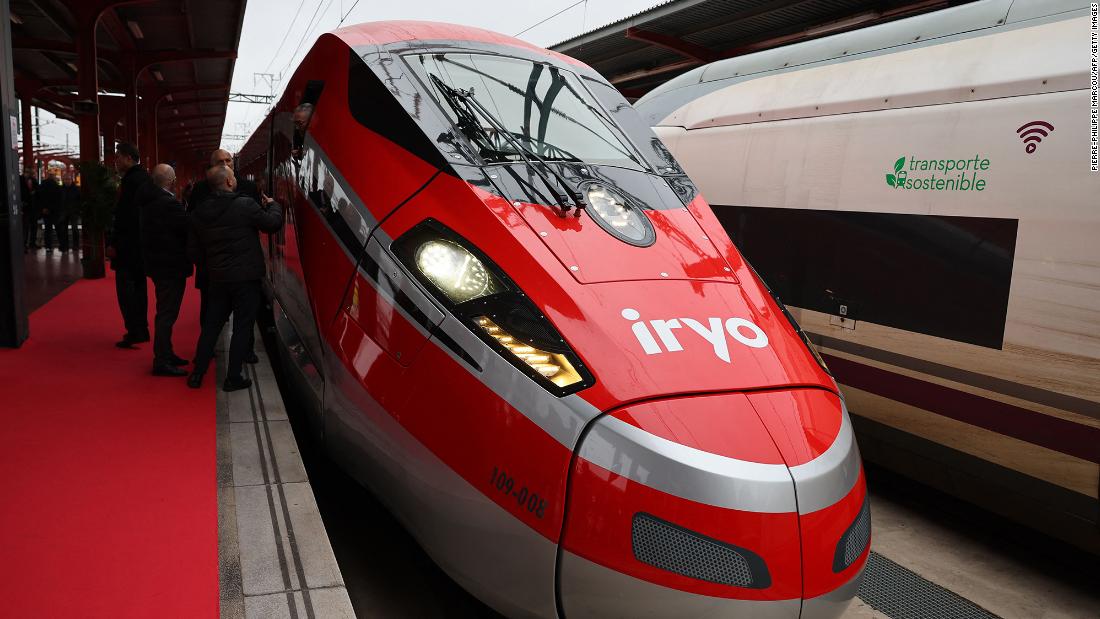 Launch of new high-speed train brand means that the country now has four different rapid transport brands now on offer to the public.

www.cnn.com
Here's another story about it. Looks like they will have different seat classes which not the case for Oiugo when we rode.

Staff member
Donating Member
As someone who doesn’t even have access to one reliable train company, I have to admit that having four different companies running on the same rails seems almost inconceivable to me. Is there one place to search and compare prices? How about a way to find out what the differences are among all these options, in terms of the trains themselves? Is it a question of Renfe vs. low cost? I @J Willhaus‘s comparison to Ryan Air is not a favorable one and leaves me less than enthusiastic about ditching Renfe in favor of a competitor.

I remember being in Italy a few years ago (Bologna maybe) and realizing that the departures for one high speed train company left from a different part of the station altogether than the standard trenitalia. Through a tunnel and down a level or two. I am not sure why that would be, unless trenitalia owns the tracks, because it seems likely to generate a whole lot of confusion, at least for people like me!

We had a 1st class seat on an Avlo train earlier in the summer this year which included breakfast. I found that I could see all prices and options for trains and buses on the Trainline App. Not sure if this new option will be listed there? We could also use our Tarjeta Dorada discount on the Renfe owned trains.

Staff member
Donating Member
Here is a video on the first train between Barcelona and Madrid:

Certainly more up scale than our Ouigo trip although more expensive.

ivar said:
Here is a video on the first train between Barcelona and Madrid:

Wow, that looks pretty posh. A joint venture between Air Nostrum and TrenItalia to operate a high speed train in Spain!

It seems to be the way of the world to differentiate more and more classes of service — this train has four different classes!

I don’t know anything about the corporate structure, but can anyone explain to me how it makes sense for state-owned Adif to license competitors to state-owned Renfe?

peregrina2000 said:
I don’t know anything about the corporate structure, but can anyone explain to me how it makes sense for state-owned Adif to license competitors to state-owned Renfe?
Click to expand...

This arrangement has increased over the last few decades in many countries - those countries where it is thought that competition in general, and in this case "above rail" (ie the trains) is good for the population. The tracks usually remain in government ownership which charges a fee to the train operator. There is increasing evidence of the results of this experiment.

As further comments would venture into political commentary I will stop here, (even though you are a Moderator) although it is worth noting that passenger trains have tended not to be profitable over a long course of history. Moving people at a profit by other forms of transport has also been challenging.

Staff member
Donating Member
Thanks to those who alerted me privately that I was unintentionally stepping into a political minefield, I had no idea! And thanks to @Sirage for artfully dodging that issue.

My question had nothing to do with subsidies, because I well understood that to be contentious and political. My question was simply asking about the genesis of the split between rails (Adif) and cars (Renfe, Ouigo, and Iryo). My experience with the European train system had always been Renfe/Spain, TrenItalia/Italy, SNCF/France, etc. That is obviously no longer the case and I wondered why. I guess I wasn’t paying attention, because based on what I’ve been told, this was an EU-wide action taken years ago, mandating separation of the two functions (rails and train cars), with competition required in the latter but not in the former.

And if you wonder how this is connected to the Camino, keep in mind that some uninformed pilgrims otherwise would have never known that they now have to go to three different websites to find out about train availabaility between Point A and Point B.

Thanks for keeping this thread out of that political minefield.

peregrina2000 said:
some uninformed pilgrims otherwise would have never known that they now have to go to three different websites to find out about train availabaility between Point A and Point B.
Click to expand...

I didn't realize this!

C clearly said:
I didn't realize this!
Click to expand...

Take a look at iryo.eu’s website. It identifies 13 Spanish cities that will get Iryo’s service.

The ouigo website, https://www.sncf-connect.com/en-en/ouigo is less user friendly, at least that’s how my first quick visit found it.

Third party websites like RailEurope show all the options, but they add what I have found to be (though I haven’t used them for years) a hefty fee. Kind of like the booking.com of rail travel.

@J Willhaus, how did you find out about this Oiugo train?

I think that the service fee charged by Omio may be lower than what RailEurope charges.

peregrina2000 said:
@J Willhaus, how did you find out about this Oiugo train?
Click to expand...

Last summer we took the Oiugo train from Zaragoza to Madrid after we finished our hospitalero service in Canfranc Pueblo. I was able to buy the tickets online. I used the Trainline App and was able to book the trip for 32 Euros total for both Phil and I. I think you can only buy Oiugo tickets online. I don't think you can buy them at the station and they did not accept our Tarjeta Doradas online. As a comparison, my trips from Madrid Atocha to Zaragoza were $98 for first class in late June and $62 second class for mid July both on Renfe. The second trip included a discount for our Tarjeta Doradas. The first trip we had not been in Spain long enough to purchase them yet. All three trips were on high speed trains. On Trainline I had to find somewhere to print out the tickets each time. I could not use my phone for an eticket as you might if you bought direct from Renfe or probably Oiugo.

The difference was that the Oiugo train, at such a good discount, was packed. The cars are double decker and there is not much legroom and very little place to store baggage, especially when the train was so full. It pulled into the Zaragoza-Delicias station and there was kind of a mad rush to get on board and find our seats and it was only in the station a few moments. It was only a little over an hour to get to Madrid Atocha and Phil was really glad the trip was short as he had to share legroom with three other tall men in his seating bank. I had to help him find a place for his backpack in a little space behind his seat between the next bank of seats or he would have had to hold it the entire way. I was across the aisle and my legs are pretty short so it was not too difficult for me, but the seats were not as comfortable as the Renfe seats. Phil said later he did not really want me to book that line again and he would rather pay for the more comfortable trip.

I'm thinking about using luggage transport. I will start the Camino in Pamplona on March 22. Correos doesn't start until April 1st. I tried looking on the Jacotrans site, it doesn't seem to work...
View full article >

Has anyone flown on Condor Airlines, and if so how was your experience? They have a decent price and good routing to fly into Paris for my Camino this year.
View full article >

Some trains free in Spain in September