"Don't dream your life, LIVE YOUR DREAM" (Not a mushroom thr

Here's an email I sent to some friends back home regarding my trip. Not surprisingly they could not grasp the profoundness of the camino. One of them even responded dully "I'm glad you enjoyed your vacation, see you soon." Read the last three paragraphs if it's too much...


Overall it has been an incredibly moving experience. Along the way I´ve met a shaman, a healer, an alchemist, a witch, a giant, a soothsayer, a monk, a knight, a demon, a saint and among others even an angel. Once you get over the physical pain, forget about the bullshit that divides ourselves (race, age, sex, religion, work, money etc), and you clean your soul and life of sin (greed, lust, envy, sloth, gluttony, wrath and especially pride/ego) your spirit rises and not only are you able to see the synchronicities (coincidences that have meaning) in your life but truley magical things start happening.
You ask the Camino (consciously or subconsciously) and it gives, it happens every day whether you realize it or not. One day in Leon I had something troubling on my mind so I went to sit on the bench by the Cathedral and asked for a sign, sure enough my prayers were answered and the issue had been resolved. One day I lost my towel and I asked the Camino for another one and the next day I found one laying on he path as I walked to my destination. Even things that you ask before starting the Camino come to you as you walk the way. These examples Ill just keep to myself however.
Most important though is the people you meet and bond with. There is a lesson to be learned from everyone you meet, for some people you are the teacher and other times you are the student. Early on the lessons were about the physical aspects about walking the Camino later its about the mental and spiritual. Countless times you get the feeling that the meeting of a certain person was predetermined, as if you were meant to do the Camino to guide this person or vice versa, you were meant to do the Camino to learn from another).
Another crazy phenomena is the reliving of dreams. It´s strange, for as long as I can remember I´ve always had dreams of walking in uncharted distant lands and during the Camino I would see and experience things that I could recall from past dreams. Ive had this one recuring dream in particular where I´m climbing a steep slope off in some far away place a Spanish like land where it´s cloudy and there are no trees around. I´m leading a couple others and there is this sense of a great journey as a Spanish guitar music playing. One day I lived this same exact dream that I´ve had for as long as I remember.
Everything that happened that day and the day before felt like it was planned. I wont go into the details because I can write all day about the syncronicities etc. Anyways we had just left Burgos and entered the Spanish Meseta, which is a huge mesa in the center of Spain that goes on for hundreds of kilometers which is void of trees and has few roads with cars. On the second day walking the Meseta there is this very steep hill ( found after Castrojeriz) and what's quite strange is that the Camino goes over this hill and not around it which would make sense because there are no other hills in the area.
Anyways just before the climb one of my fellow companeros turns to me and says we are going to fly over this mountain. And my other companero Giacomo, italian for Santiago (again there were many synchronicites regarding him that I wont go into), turns to me and says "here borrow my MP3 player for inspiration as you make the climb." Sure enough it was Spanish guitar music and as I made the climb I felt nothing of my feet and backpack as I was entranced by the landscape which was a spitting image of this recurring dream, in fact I was living the dream. Everything about it, the landscape, the weather, the music, the climb, had been in this dream. At one point I turn around and see my companeros a bit behind with the castle off in the distance and I'm nearly moved to tears as the song "Spanish Caravan" by The Doors begins playing which is an adaptation of Albeniz Isaac's "Asturias". I walk the rest of the way in a total trance, again not feeling any physical discomfort in fact not a physical presence at all...

Re: "Don't Dream your life, LIVE YOUR DREAM" 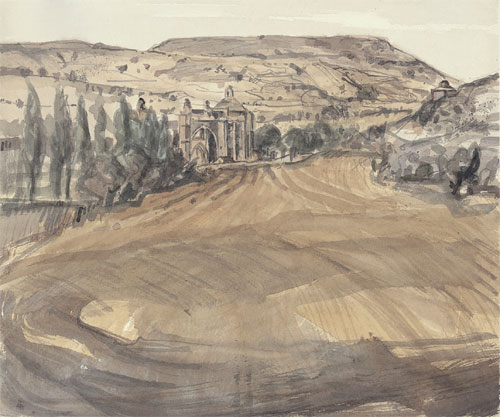 Found this image of San Anton (the abandoned monastary before Castrojeriz) which captures quite well the impression the landscape and environment had on me as we walked the tapa (from Sambol-..de la vega) while experiencing an altered state of consciousness.

Glad to read that the Camino was such an incredibly powerful experience for you delecto. Not quite a vacation as you say! And no doubt much to percolate within you in the months to come.

Thanks for sharing the beautiful Spanish guitar music played by Williams as well. "Climb every mountain" was a tune that helped me on the steeper parts of the climb from SJPP.

All the best for where you go next.
Margaret
D

Yea upon returning "home" Ive felt completely estranged from the depersonalized way of living and (as a companero during the during the camino put it) "the brainswashed community" that is the USA. After turning to literature (tibetan philosophy, Coelho, and surprisingly Dante) ive decided to move to Spain for good. So yea after only a week of being back I bought a one-way ticket out of here with plans of walking the Via de la Plata and seeing what the camino throws my way.
H

I can't wait to read your book when it is out. You are a wonderful writer and I really felt like I was right there with you. I've been reading this forum for months and never seem to find many that have these kinds of experiences or that are willing to share them. I walk in Aug 09 to find that very person... the one that is soooooo disillusioned by growing up in this country we called america. Now I call it the land of the greedy, asleep and completely delusional. I first read of Shirley MacLaine's trek and thought "I want that"... now many, many years later the Universe has opened the door for my own journey. I love how you described all that you met.... a shaman, a witch.... I can only hope after all of it that I/we are able to finally leave this country that just totally thinks its ok to shit on your neighbor if you get what you want. It's been amazing to me what has happened just as I prepare for my journey.

What part of this country did you reside in?? I'm in Oregon having escaped Michigans toxic environment. How are you able to move to Spain so easily? Any heads up would be wonderful... we sound like we are kindreds...and I'm sooo happy for you.

Brainwashed or braindead??? We have been soooooo hypnotized in this country over those last miserable bu$h years.... being a Hypnotherapist I recognize in our tv programming as well as our news.... and sadly most won't even believe it. I'm just soooooooo thankful that this election wasn't stolen also. (YES PEOPLE.... WE NEVER ELECTED IDIOT BU$H.... THEY OWN THE VOTING MACHINES ) They did this while declaring the whole world should be a DEMOCRACY!!! SOOOO EMBARRASSING TO THOSE OF US AWAKE) What HYPOCRITES!! I don't mean to get off topic... I just had a friend return from his Camino and evidently he was harassed several times for being an american.... don't know the specifics but his wasn't a good journey sadly. Or was it? I don't want to get political (hopefully Obama can help clean up this mess) but I know how you feel. If I was financially set, I'd be out of here today!!! I think I will mark my box for nationality as a Canadian.

I can't wait to read more about your journey... it truly IS Magickal !!!

I agree with some of what you said. This thread did not last long! Living on the Camino dream

What is your 'Dream Camino,' and why?