I remember walking through small farms to get to Hospital de Orbigo. When we arrived we thought we were hallucinating! There were thousands of people in medieval costumes, colourful tents with pennants flying, knights on brightly decorated horses jousting in a field next to the bridge. The town was packed and the revelry went on until the early hours of the morning.
This was the annual Paso Honroso de Suero de Quiñones fiesta which will be held in Hospital de Orbigo on 7th and 8th June.
This from http://www.entertainmentinspain.com

The Medieval Jousting of Passo Honroso (the Honourable Pass) are held in memory of the feats of Don Suero de Quiñones in the 15th century. Don Suero had made a vow to his love Leonor to fast on Thursdays and to wear an iron ring around his neck. But he wanted to be released from the promise, and so he proposed that he would break 300 lances of the foreign knights who crossed the bridge. His challenge was never completed: after breaking only 166 lances the judges took pity on him and released him from the vow. Since then, every year on the first weekend of June, the village of Hospital de Órbigo remembers that day when Don Suero and his attendants pitched themselves in contest with a group of knights. The tournament is one of the main acts of the games, which include a parade of standard bearers and mounted knights before the great battle, and the ladies' medieval dancing and folk music. The medieval market and the different games and contests that fill the streets, attract more than 15,000 tourists every year, to mix with the townspeople who dress up in mediaeval costumes.
The end of the festivities is celebrated with a public mediaeval feast, including entertainment from minstrels, jugglers and saltimbanquis (circus performers), and followed by an impressive medieval torch-lit procession.
Click to expand...

That sounds like a magnificent time! I would love to be there for that!
Buen Camino,

Thanks for reminding me of this wonderful place. Last year I walked from Leon intending to stay at St Martin, but decided to continue not really knowing where I was heading to. It was the 1st June as I walked through what I thought was a small village, there in front of me was this magnificent bridge. They were just setting up all the tents on the Jousting field. There was lots of hussle and bussle about, with the locals setting up craft stalls, bunting strung across the streets, the atmosphere was wonderful, with an air of jollity amongst everyone.
I stayed in the private Albergue St Miguel it was a lovely place with a courtyard. In the evening we went out for a meal, the stall holders were all set up and the Vino Tinto was following! I have to admit I walked to Astorga with a hangover....not advised! A few of the pilgrims decided to stay another day, I wish I had, as the atomosphere that evening was fantastic. I can imagine it's a brilliant fiesta!!
In Santiago I met one of the pilgrims that stayed and she said that some stayed the whole weekend! Oh wonderful memories!
Marie 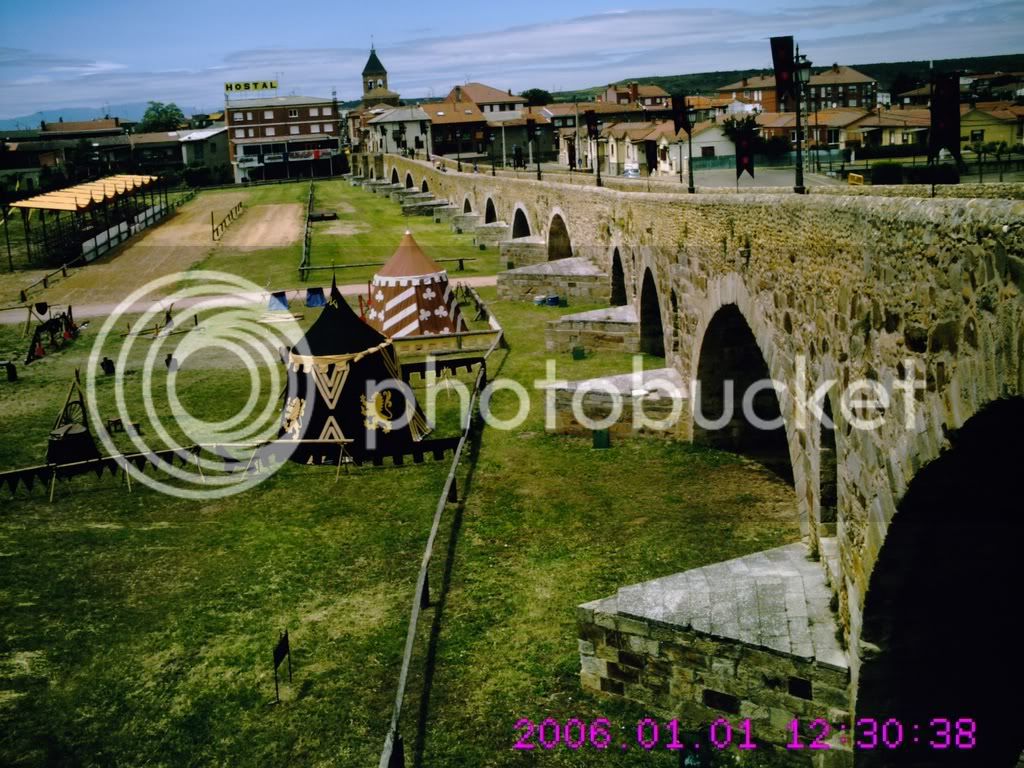 La Virgen to Hospital del Orbigo: via Mazarife or Villadangos?

Jousting Festival in Hospital de Orbigo - June 1st and 2 nd. A must see in the Camino Frances.