My journey to the Camino

Seems like everybody has a story on how they got to the Camino. Thought I would share mine...

My journey to the Camino began a long, long time ago in 1984 (when dinosaurs still walked the earth ). I was working in the sports marketing department for Miller Brewing Company at the time (responsible for our sponsorship of the US Olympic Hockey Team) and I was sent to Sarajevo, Yugoslavia (now called Bosnia-Herzegovina) for the 1984 Winter Olympics. 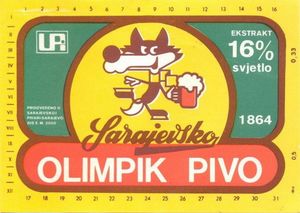 I drank a lot of these in Sarajevo! It was like jet fuel… 16% alcohol!

I heard about the Camino from some random drunk guy from England in a bar in Sarajevo. He mentioned (after we drank many pivos) that he had walked the Camino de Santiago and said that it changed his life.

Intrigued by his tales, when I returned home, I headed out to the Milwaukee library (since Al Gore had not yet invented the internet) to research the Camino. I was fascinated by what I found and thought it would be a grand adventure to undertake. But life soon got in the way (went back to school for my MBA, got married, changed jobs, blessed with a great son…) and I forgot about the Camino.

Fast forward to late 2016, I was doing some planning for our upcoming summer vacation and I was Googling (yes that is a word) something about hiking adventures in Sedona, AZ, and the Camino showed up in the search. I clicked on a YouTube link and watched a pilgrim who just completed the Camino talk about their experience – it took me back 32 years to that dark smokey bar in Sarajevo and hearing that Brit talk about his adventures on the Camino. Instantly, I decided that it was time to do the Camino de Santiago.

Unfortunately, I was fat and out of shape. At the time, I weighed 220 pounds (100kgs) and realized I would have to lose a lot of weight if I was to do the Camino. During the summer of 2017, I lost 55 pounds (25kgs)! I lost all this weight without doing any real exercise (except I took the batteries out of the remote control and had to get up and change the TV channel ) I actually went on the Keto Diet.

Buen Camino, Pilgrim; I look forward to hearing how your Camino progresses. My prayers and thoughts go with you.

Go for it! Buen Camino!

What a great story and backdrop to your first Camino. Yes, I wrote first Camino and I meant it. Don’t be surprised if it gets into your blood.

Year of past OR future Camino
Camino Frances October 2018

what a great story, thanks for sharing! How will you document your Camino?

tomnorth said:
What a great story and backdrop to your first Camino. Yes, I wrote first Camino and I meant it. Don’t be surprised if it gets into your blood.
Click to expand...

And be surprised if it doesn't get in your blood.

Hi there @JJinWI
I enjoyed reading your post. It’s never too later to start. No doubt you’ll be wondering as you walk, how it would have been in the 80’s; (seeing the dinosaurs, lol)....... but your first camino will be special and worth the wait.
Regarding the ‘jet fuel’ in Sarajevo in 1984; Im just back home from a 3wk tour of the Balkans (after completing my 2018 camino in mid April)., and can tell you that there is still a lot of ‘powerful stuff /jet fuel’ served/drunk in the countries I toured through. Not my ‘cuppa tea’ but fun to join in and try.

Your camino will be all the sweeter for the wait -

Year of past OR future Camino
Camino Frances, The Jakobsweg

Its funny you mention bars...
A long time ago in a bar far far away..(from Europe)
A bartender was talking in a odd language..
Something about his name..
Santiago..."you know..St.James"his namesake..
Camino
Camino de Santiago
Compostella...RiverofStars500mileWalkSellosPeregrino....

What?
You know..St James..what kinda Catholic are you???

Barkeep..what is theese ting you speak of?

I hope James the Barkeep, Pilgrim and taker of journeys made it to Santiago.

I wonder what's in the,waters of Spain that keeps a man thirsty for more?

A grand adventure to you JJ!

Thanks for sharing the great account of your inspiration for your camino! May all your dreams come true once you set out.
Check out this earlier thread of others' inspirations for walking; one never knows who or what might start us on that very special path.
https://www.caminodesantiago.me/com...alk-the-camino-because-of-a-book-or-fi.18839/
Ultreia!

in our minds, we're vagabonds, you and I

Great lead up to how you got to your Camino, I look forward to hearing about where you go after your Camino. Buen Camino Pilgrim, remember...shorten your stride on the steep uphill portions...that will make more sense on the 22nd.

Year of past OR future Camino
Camino Frances (March-April 2018)

If you walk with the same spirit in which you have prepared, you are in for the continuation of an amazing story! Buen Camino!

Year of past OR future Camino
1989

Wow. It was obviously fated. Nowadays, with upwards of 300,000 people walking each year, it may not be guaranteed to find a pilgrim in every bar but to find one would not be unusual. But in 1984 and before there were generally less than 500 people a year walking the Camino. Even the Holy Year of 1982 totalled less than 2000 compostelas given out. What were the odds of meeting one of those very few peregrinos?

Best of blessings be with you JJ
I have been on the Camino since 27 April and will finish tomorrow by walking from Muxia to finisterre then return to normal life
My calling came in 1995 by reading a book by Paulo Coehlo - I too delayed but it is worth doing this journey
It is fascinating how the physical endurance’s and pain are somehow counteracted by the beauty that surrounds and in the people
Be careful that you don’t take too much stuff
I have things in the bottom of my bag that I don’t use - I won’t bring them next time
Each gram counts in terms of pressure on your feet, joints, bones, shoulders
Never forget it is your Camino
It is not a race - you don’t have to keep up or beat anyone
Wishing you many blessings and Buen Camino

It's like a condition you get and can never get rid of. You may be planning your second before you get home from the first... My journey of the soul (Camino Frances)

Starting my journey on Sunday

Post Camino - the place to reflect on your journey