Time of past OR future Camino
See signature

Like many others, I skipped the ugly and urban Lucca - Altopascio stage when I walked the Via Francigena last fall from Aosta. This spring, however, Sandy Brown, author of one of the leading guidebooks to the route, posted about a new alternative route on the VF Facebook page. Intrigued, I decided to try it out when in Lucca last week for some R&R after having walked the Via degli Dei.

And it's terrific! Scenic, tranquil, and easily walked in one day, certainly the equal in beauty (and more peaceful) than most of the preceding stages between Pontremoli and Lucca. Starting from the train station in Lucca, it cuts ribbon-straight for 4 kilometers on a dirt path through a park in the shadow of a 19th Century aqueduct. At the end of the aqueduct, you enter into the woods and climb some 200 meters over the next 1.5 kilometers until you reach the ridge. For the next 5+ kilometers you may feel like you're back in the Apennines. Shaded hardwood forest, winding up and down (but not overly so), and with great vistas back towards Lucca and over the Alpi Apuane.

Once you get down, it's dead flat to Altopascio, but the trail remains serene and tranquil as you wind through a series of canals on rural paths where the only traffic is an occasional tractor. Unlike the Po Valley, though, there's some tree breaks and the surrounding hills provide a nice vista in the distance. You'll join up with the official route about 3 kilometers out of the center of Altopascio, and you'll be instantly glad to have avoided it.

From the train station in Lucca to the church in downtown Altopascio, it's 24.1 kilometers / 15 miles, with an elevation gain (and loss) of 410 meters / 1345 feet. More than half of it is on dirt trails or paths, and I didn't see another walker all day. Except for some very very short stretches on a real road, I also encountered next to no cars until I joined up with the official route outside of Altopascio.

Here is the actual route I followed (with one exception, discussed below). It should open easily if you have Mapy.cz installed (and if you don't have it installed, you should!) 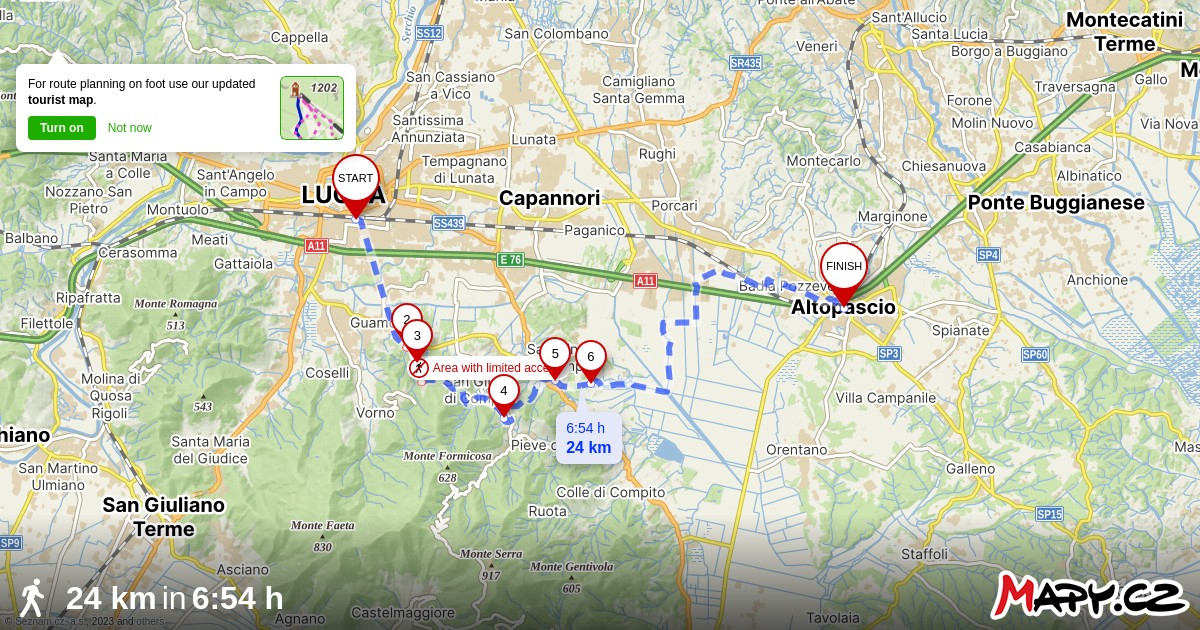 It also tracks the route Sandy Brown described, except that I found a peaceful side road which avoids 500 meters on the busy SS439. You can read Sandy Brown's Facebook post here: https://www.facebook.com/groups/19899007360/search/?q=sandy brown

1. For much of the way, this route is marked as a variant to the regular Via Francigena route. However, the "official" variant is approximately 40 kilometers and is not readily doable in one day. This alternative departs from the official one at the end of the aqueduct (it rejoins it later), so you should not follow any VF signs once you reach the end of the aqueduct until the point where you rejoin it, which will be obvious. Follow the gpx track instead.

2. The one part of the route I did not follow was from the end of the aqueduct to the ridge. This is because I approached the ridge from the little hamlet of Vorno to the west rather than from Lucca to the north. I did this because I wanted to shave off a few kilometers and because I assumed that the beginning of the route, as it headed out from Lucca, would be busy and urban. The next morning I walked the aqueduct part, and found out that it was totally tranquil -- if not quite as scenic as plunging into the woods and the climb right away. And it turned out that starting from Vorno only saved me 3 kilometers. But if starting from Vorno sounds more appealing, I can send you a track. It's reachable either by taxi, or by the E18 bus from central Lucca.

3. You'll find water fountains along the Aqueduct, and later, along the trail between San Giusto di Compito and Sant'Andrea di Compito.

5. If you open my track in Mapy.cz, you'll see some waymarks. Here's what they mean:

--- Start: The track starts from the south end of the Lucca train station. This is the side away from the city walls and the center of town. With your back to the train station, go left (east) and in 140 meters turn right onto Via del Tempietto. Almost immediately, you'll see the aqueduct.

--- 2 (and 3): This is the point where the track departs from the official alternative. The trail from here to the ridge crosses private property, but Sandy Brown said that it is open to walkers. The landowner only wants to bar cars and bikes. (If you find otherwise, you can stay on the official variant, and it will get you to the same place. It'll just take you an extra 600 meters).

--- 4: Just off to the right, you'll see the public fountain. And right before this point, you'll re-join the official, marked variant.

--- 5: This is where my track departs from Sandy Brown's, allowing you to avoid 500 meters on the busy SS439. When you get to the intersection with that road, follow it just a short way to the first intersection (Via Castel Durante). Turn left, and after less than 200 meters, you can turn right onto a broad dirt path which will run you right into the Via della Francese, where the (by now official) alternative continues to the left. It will be obvious.

--- 6. At this point, about 50 meters to the right along the intersecting Via di San Ginese, you'll find the one and only bar I saw. Personally, I would never count on any particular bar to be open, so carry some lunch.

--- End: At the Chiesa San Jacopo Maggiore, in the center of Altopascio.


Here's a link to some photos: 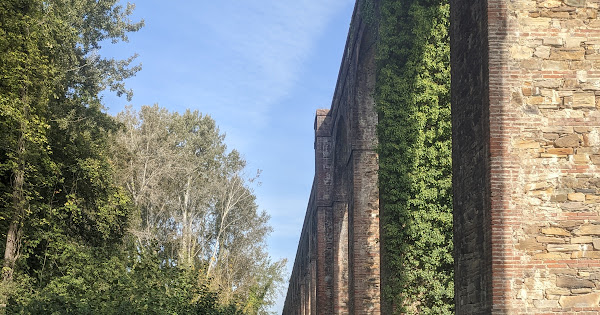 Thanks for your very detailed post. I walked the main VF route from Lucca to Altopascio in summer 2015. It was not one of my favourite sections of the VF but I've never understood why it has such a bad reputation. I often read posts from people about skipping that stage. Not very beautiful and not particularly inspiring. But just a slice of ordinary Italian life. If a more attractive route had been offered to me I might have taken it. But I have no particular regrets about walking through the suburbs and industrial estates that day.

Time of past OR future Camino
Oct/Nov 2022_Mozarabe from Almeria

Thanks @andycohn
Your description is great - I’m hooked.

Time of past OR future Camino
May 2023: Via Francigena, Lucca to Rome

Bravo! This is invaluable.

I exported your gpx tracks to All Trails as "Via Francigena, Segment 88: Lucca to Altopascio (alternate route)."

I made it public for others to use, and can add notes and credit (or make it private) if you'd like.

I submitted it as a "new trail" also, though it is still pending acceptance. That link will be https://www.alltrails.com/trail/ita...egment-88-lucca-to-altopascio-alternate-route

For comparison, here is the current map of the route on All Trails: 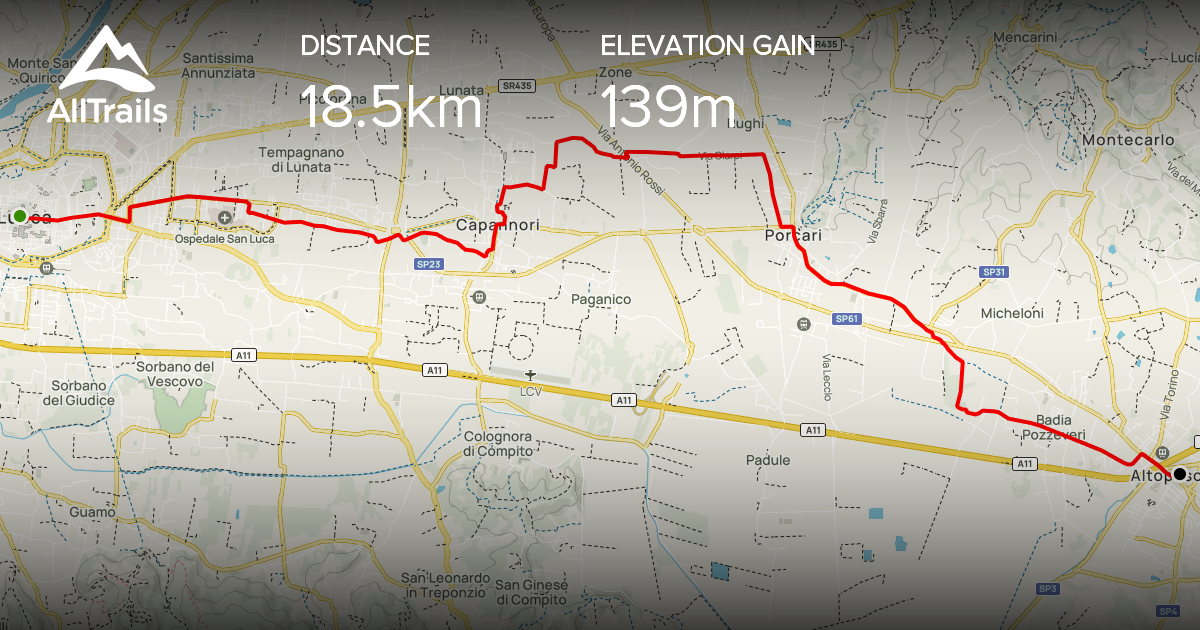 Check out this map I created on AllTrails.

Time of past OR future Camino
See signature

MichaelC said:
Bravo! This is invaluable.

I exported your gpx tracks to All Trails as "Via Francigena, Segment 88: Lucca to Altopascio (alternate route)."

I made it public for others to use, and can add notes and credit (or make it private) if you'd like.

For comparison, here is the current map of the route on All Trails:

Check out this map I created on AllTrails.

Great. Thanks. That will make it more accessible to people. (It would defeat the purpose to make it private). No need to credit me. Most of the credit belongs to Sandy Brown anyway. Feel free, of course, to add any of my notes regarding the waymarks, if that seems appropriate.
Last edited: Oct 20, 2022

That section out of Lucca beside the viaduct is a popular walk. I recall @Camino Chrissy walked it a few weeks ago.

It is also the link to the VF cycle route and when I was there in 2019, there were quite a few cyclists going past (organised tours). You'll also see from the map it at #4, you're on the cycle route. Just a heads up for those trying it out in the warmer months.

Bradypus said:
Thanks for your very detailed post. I walked the main VF route from Lucca to Altopascio in summer 2015. It was not one of my favourite sections of the VF but I've never understood why it has such a bad reputation. I often read posts from people about skipping that stage. Not very beautiful and not particularly inspiring. But just a slice of ordinary Italian life. If a more attractive route had been offered to me I might have taken it. But I have no particular regrets about walking through the suburbs and industrial estates that day.
Click to expand...

I totally agree. Walked from Torino to Rome this past Feb/Mar. Oddly, this segment was the only time I encountered other pellegrini - two different young Italian women who started from Lucca. The segment was pleasant enough and, as you mentioned, a change from other stages.

I walked the variant about 4 weeks ago during my London to Rome walk that I finished just a couple of days ago. I decided to walk the variant based on what Sandy Brown had posted on a Via Francigena Facebook page last June/July. He posted a link to the GPX tracks together with a profile and a full description of the variant. It was easily followed and is fully marked with Via Francigena signs and the usual GR red and white markers. A nice route and fairly straightforward to walk with decent views from the easy climb after the aqueduct. Enjoy!

Time of past OR future Camino
May 2023: Via Francigena, Lucca to Rome

Update: the variant was just accepted as a “verified” trail on All Trails! Someone also uploaded some nice pictures

Yesterday at 8:09 AM
Dodger