The Herbon pepper pizza is born. 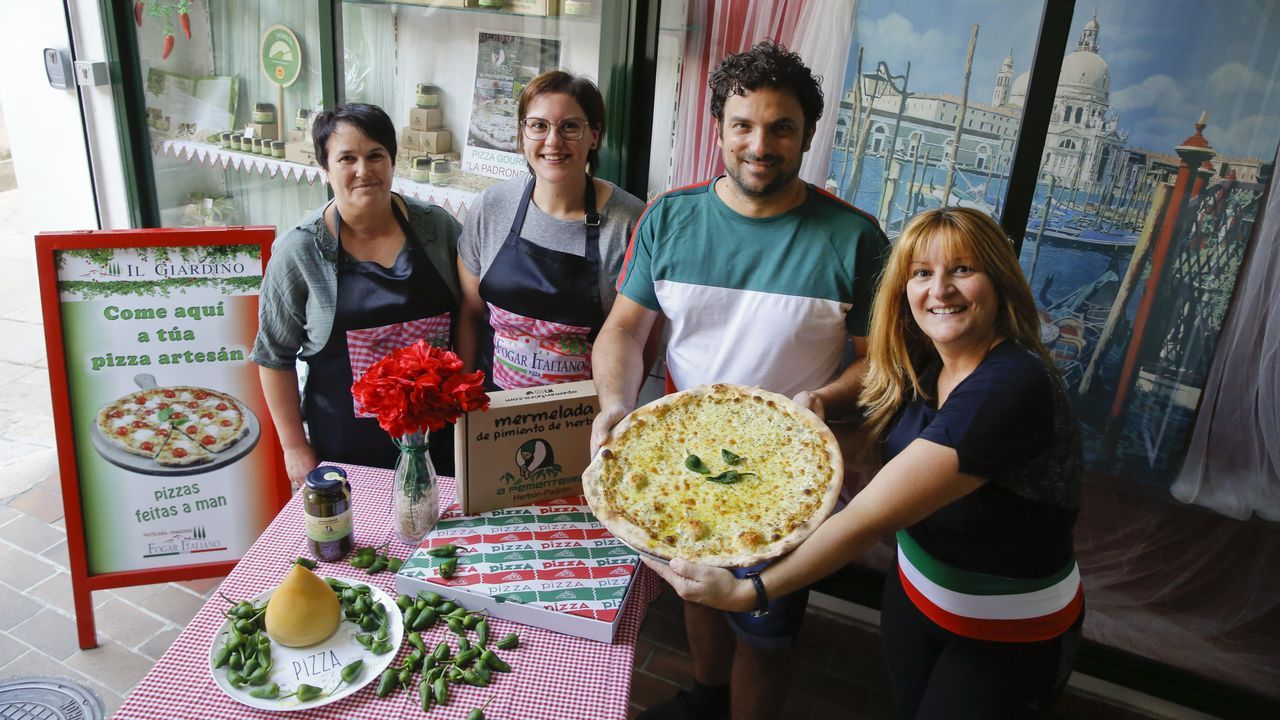 What could come out of the oven of a Sicilian and a man of pure strain? The answer is a Herbón pepper pizza. This is the culinary masterpiece created by Giuseppe Pileri and Cristina Dopazo, a marriage based in the capital of Sar that met when he went to live there. They have baptized the creature as La Padronesa and serve it in their business, Fogar Italiano, the pizzeria that opened almost three years ago in Praza da Leña and that a while ago moved to the galleries of the Rúa Fondo de Vila, where the Couple also has the Il Giardino bar.«To Padronesa, Queixo San Simón cam, mozzarella and marmelada de pementos de Herbón, gives cooperativa A Pementeira. Eu thought he would know twelve. Cando a probei, surprising and we commented among us that I could perfectly combine nunha pizza, ” she says. The final recipe was a matter of both. He went to the first and did not have to repeat it to find the flavor they were looking for. "Ao meu home gústalle facer cousas novas and try," he explains. This Italian, passionate about pizzas, comes from a family of bakers and pizzerias, so it is a dish that not only represents his land but accompanies him from his earliest childhood.«And, it seems incredible, it doesn't get bored of pizza. On the contrary, he is a great taster, and when we travel we always want to try something that comes to my attention, ” says Cristina. His Padróna does not go unnoticed, although they do not even have it in the letter . «We closed ago in September and, for a few vacations, I will include it in the new letter» , they point out. Crowned with a couple of whole peppers, there have already been many customers who have succumbed to the temptation to find out if Herbón's pepper pizza spicy , ou non . To anyone who is curious, you should know that you can enjoy both spicy and without it. And, according to Marité R. López, Padron's gastronomic influencer, is like "traveling to Italy without leaving Galicia."

Year of past OR future Camino
Again, soon as possible!

A culinary match made in Herbón?
B

On completion of our recent PC (May/June) we were introduced to Padron pepper entrees at the Santiago Market stalls. On returning to Australia we sourced the seeds from a supplier in South Australia and now have seedlings getting bigger each day. Hopefully we will be in a position to give small Padron pepper plants to our North Queensland friends for Christmas. Transferring some plants to our garden in a month or so we will have our own supply to fondly remember our latest Camino.

I asked the good people at El Gato Pizza in Lalin if they ever considered making a pizza with pimentos de padron, and they looked at me as though I'd lost my mind.
But I'm very happy to know that someone's thought of it. Yes, please indeed! Food and Drink of the Way!

Food along the way