Warning to all pilgrims (& all others): A heat wave is coming!

Long term forecast shows that hot air is coming from Africa towards Europe, starting from Monday June 24th, and lasting at least into Sunday 30th. Temperatures are predicted to rise into the 40s (Celcius, of course) effectiviely.

So better get up very early and stop at noon, rest in the shade and drink something cold (I'm talking beer here, but juice will also do...).

Predicted heat map: As you can see, almost all of Spain (and Portugal) will be heavily affected:

This is precisely why I advanced my unavoidable break on the 2019 Camino from beginning of July to beginning of June --- personally very annoying BTW as I used to have a strong capacity to walk beneath those dog days, I've done a 65K beneath 40°, but I can no longer get close to any such feats of endurance, and as I looked at the more long-distance weather forecasting for this summer, the more apparent it became that I needed to pass this season by.

Good luck to all of you out there under that blazing sky !!! Wish I could still be out there with you all ...

Amazing that almost all of Galicia is skipped over! Everyone: just get to Santiago and you can enjoy cooler temps!

Please, if you don't have any, invest a small amount of your money on suntan lotion. With such a fierce sun, it can do so much damage to our delicate skins. Above all, make sure you drink lots and lots of liquids as it's easy to forget that we lose so much more during the hotter spells.

Similar temperatures seem to be expected next week in most of France.

Some of us reside in summer temps of a daily average of 40-45C (110F) and are familiar with managing heat & exercise. Most importantly, hydrate early and often and avoid alcohol. Watch for signs and symptoms of heat-related illness. If you ignore these symptoms, your condition can worsen, resulting in a medical emergency. Signs and symptoms may include:

If you develop any of these symptoms, you must lower your body temperature and get hydrated right away. Stop walking immediately and get out of the heat. Just because others are still walking doesn't mean you should. Take care of yourselves, pilgrims!
Last edited: Jun 22, 2019

Lightweight, and loose-fitting long-sleeved shirts protect against UV (sunburn) and infrared, radiant heat heating up the skin. Keeping the direct sun form hitting the skin helps the body stay cooler. All one needs do is look at the garb worn by primarily desert dwellers

From all that I read this heat wave will be severe all through Europe with it being the hottest on the Iberian Peninsula. One of
Those reflective umbrellas people use on the Southerly Caminos would probably be a very good idea. I read awhile ago that in addition to severe
daytime heat it will not cool down much at all at night. If you live in the States buy your sunscreen at home.
It was really expensive on the Portugues Camino 2 years ago!

Holy Pony! Bad news! I am still south of Cuenca!!

I did bring an umbrella though, for extra shade. At least it is something...
D

Heatwaves happen every summer in Spain, lived in León 17 years and never found them a problem, large hat loose clothing long sleeves and trousers and plenty of water and take it easy

Dsavid Keyte said:
Heatwaves happen every summer in Spain, lived in León 17 years and never found them a problem, large hat loose clothing long sleeves and trousers and plenty of water and take it easy
Click to expand...

This currently expected heatwave is making the news because it is expected to hit France, Germany, Benelux etc where heatwaves in general are not as frequent and intense as in Spain and where new record temperatures are expected for a few days. This one seems to be a bit unusual: apparently, how bad (hot) it will be in the end will also depend on how much Sahara dust will be included in the hot air coming from the south.

Exactly. Apart from the usual (water, protection from the sun, shade, early morning etc): Don't walk much or don't walk at all when you are not used to such temperatures.
Last edited: Jun 22, 2019

After today’s relentless rain I’d welcome a heatwave, but it seems that I’ve brought some typical Irish weather with me, and I’m in Asturias not Galiicia.
L

28C and sunny when we walked into Oviedo yesterday. 18C today and mostly rainy. But knowing how dangerously hot it is south of here, we’re grateful for cool and rainy. Back to the Norte tomorrow.

On the other hand... 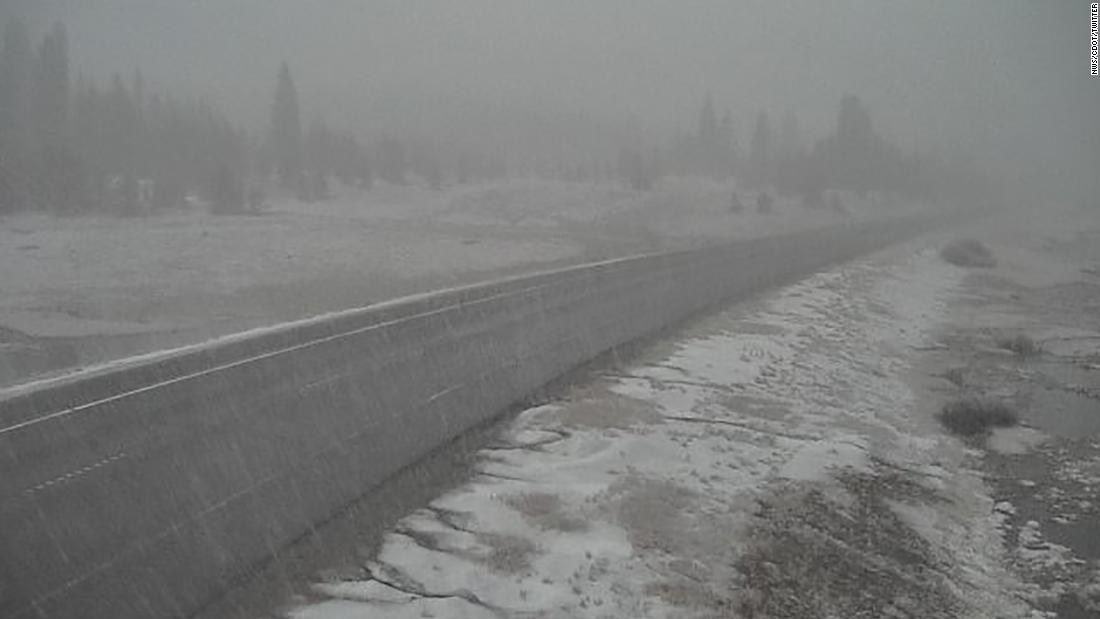 The snow began to fall on Friday, just west of Denver in elevations above 7,000 feet. Snow has also been reported in parts of Montana. Summer Solstice who?

Staff member
Donating Member
This is the forecast on TV for Thursday as seen on TV right now: (but it seems the heat is staying for many more days) 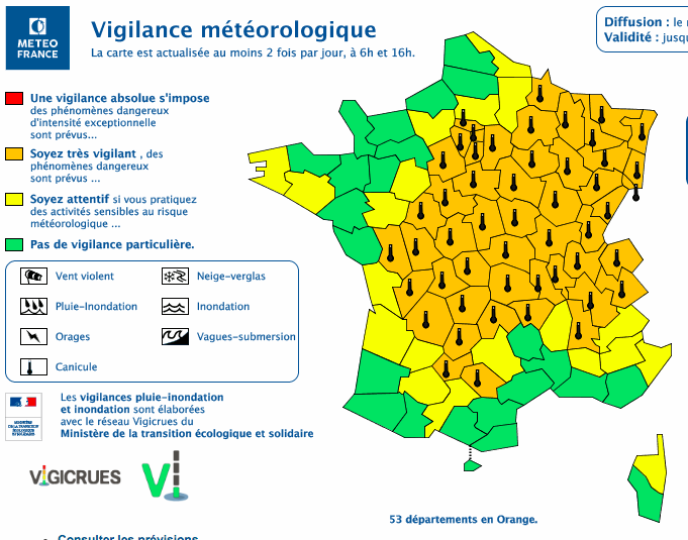 No top-level danger warnings yet.

davebugg said:
Lightweight, and loose-fitting long-sleeved shirts protect against UV (sunburn) and infrared, radiant heat heating up the skin. Keeping the direct sun form hitting the skin helps the body stay cooler. All one needs do is look at the garb worn by primarily desert dwellers
Click to expand...

The area in Catalonia where I stopped about a month ago because the heat was too much for me is projected to potentially hit 45°C tomorrow ... it was already up to 32°C at the end of May !!

This is definitely one of the summers where if you can't stand the heat, get out of the kitchen ...

It's almost certainly going to be worse than 1976.

Happy to be of Norw. origin, as is the painter of The Scream, Edvard Munch... Crazy similarity...

The extreme South of France in the broad area between about Aix-en-Provence, Marseilles, Avignon, and Montpellier -- so a crossroads area for many Camino routes -- could get temperatures today between 42°C and 45°C

Do be EXTRA careful, this is no joke -- two have already died from it, including one as young as 17 : https://www.express.co.uk/news/world/1146431/spain-heatwave-weather-forecast-madrid-Cordoba

Yep and today it is 56 in Hontanos at noon with thunderstorms forecast overnight, back to sweater weather
A

biarritzdon said:
Yep and today it is 56 in Hontanos at noon with thunderstorms forecast overnight, back to sweater weather
Click to expand...

Sorry I should have been clearer.
A

biarritzdon said:
Sorry I should have been clearer.
Click to expand...

It's been raining in Pamplona/Puente la Reina.

But it's definitely heating up this weekend again --

OK, there's an official warning in France for next week -- temps in several parts of the country expected between 35°C and 40°C as a baseline.
A

JabbaPapa said:
OK, there's an official warning in France for next week -- temps in several parts of the country expected between 35°C and 40°C as a baseline.
Click to expand...

Positively AUSTRALIAN! We could use a bit of that right now, here in Adelaide!

Camino(s) past & future
Past: Nijmegen (Holland) to Fisterra, July-November 2019.

JabbaPapa said:
It seems that four more waves of this heat are predicted for 2019 --

Great, that's more or less 1 heatwave per every month on the camino, should be manageable

Well according to heat maps I've seen, the only cooler areas are north of the Spanish mountains and so basically the Norte route, and a broad area south of the Alps but north of the central Italian mountain ranges stretching between about Monaco and Venice, and including Turin, Milan, Bologna and etc.

Everywhere else appears to be completely scorchio.

The Catalan, Via de la Plata, Madrid, and similar Caminos are probably getting the absolute worst of it.

Camino(s) past & future
Past: Nijmegen (Holland) to Fisterra, July-November 2019.

Belgium is no walk in the breeze either. Very easy to melt or get a heatstroke. Drink a ton of water.

The funny thing is that I am now in Africa, more specifically in Algeria and here ... I will not say that it is cold ... but the temperature is very reasonable !!

I am recovering from a heat stroke on the Camino de Invierno at the moment... There was only one really hot day, but sometimes it's all that it takes... Take care out there...

I'm in a Leon hotel with air conditioning. I notice that I've acclimated to the heat so much that I'm uncomfortable below 23°!