On this date in January...

Here's the thread to post pictures, musings, etc. for any dates in January from any year, and for any Camino route.

When you respond, please mention the year, route you were on and where you walked (or rested) that day. Thanks!

Give back to the Camino
Peaceable Projects Inc. is a U.S.-based non-profit group that brings the vast resources of the wide world together with the ongoing needs of the people who live, work, and travel on the Camino de Santiago pilgrim trail network in Spain.
L

Year of past OR future Camino
Camino Francés (1974 + others)

6th January 2020 -Epiphany
Via Francigena - Vercelli to Nicorvo
One of the lovely things is the local touches that individuals and associations and businesses that I found on this section - from hand-painted signs, hand made benches for pilgrims, interesting little signs like this one on a bridge just after Palestro.

7th January 2019 Camino Portugues - Povoa de Varzim to Marinhas
Having previously walked from Lisbon to Povoa de Varzim, I picked up the route again after flying in that morning- for a glorious winter's day of blue skies and sunshine while walking along the coast. Marinhas albergue was open, lots of hot water and social distancing was no issue as I was the only pilgrim there.

7th January 2020 - Via Francigena
Nicorvo to Garlasco
Woke to find a foggy morning which was not great for the first 1.5km of a road walk. Most of the day was on tracks through fields beside irrigation channels, and it was eerie as I could hear farm machinery but with the fog couldn't see the tractors working in the fields. Glad of stops in Mortara, Tromello and Garlasco for coffee and lunch today to get out of the cold and fog. My accomodation for the night is just beyond Garlasco in a centre called Exodus, it works with young men with drug addictions. They have developed pilgrim accomodation which was decent (it was better when they switched the heat) and meals are taken with those resident

From my blog for the first week of January 2010 on the Camino Frances.

Leaving was a crazy; Bill and I were up well before dawn to drive to Paris and my TGV to Bayonne. After our goodbyes and a cold delay, it was minus 7 Celsius, the train eventually left. All went well through the frosty French countryside until an unscheduled stop near Poitiers!

Ice was frozen on the tracks so the train waited for 1 1/2 hours until all was cleared. Needless to write many connections were missed including mine! The rolling hills between Bayonne and St Jean Pied de Port could not be glimpsed in the winter night.

Arriving at 10pm I stayed at 39 rue de la Citadelle with the Amis du Chemin de Saint-Jacques; luckily their office stayed open for late arrivals. Unfortunately their regular Albergue is undergoing renovation for this new Holy Year 2010 so Mme Jeannine, the famous hospitalera of the past years was not on the scene. St Jean Pied de Port just wasn't the same without her.

Four other pilgrims were there; all guys from Austria, England, France and South Korea. We five shared an ad hoc "common dorm" in the office plus breakfast offered by the Amis.

Last night, January 7, I stayed at the very comfortable municipal albergue in Valcarlos. New and well designed it is a great improvement from the old spot which was tucked between two public loos! I was the only pilgrim and slept for 12 hours!

Valcarlos, a Spanish village close to the border and within the Pyrenees, is named after a legendary battle. When Charlemagne (Carlos) fought the Moors and lost he retreated to a valley near here. Hopefully I will NOT need to retreat!

Today was a 6 hour slow trek to arrive at Roncesvalles monastery. Wind, ice and snow made the climb up the Ibaneta pass along the road extremely tiring. I am pooped; it was quite a slog at 70 !

A young guy from Hungary and 4 Spanish are also in this small unheated winter albergue entered through the monastery passage which leads to the church. We six attended the traditional evening vespers service.

Now on my bunk I worry not only how deep is the snow and what is tomorrow's forecast? But, as always, I wonder how this new Camino, shall go?
.....

Outside is this winter wonderland.

To Trinidad de Arre on the Camino Frances
January 11, 2010 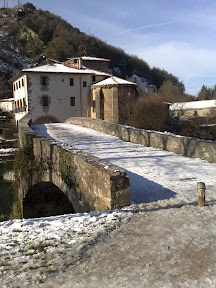 Yesterday was 20 cold, lonely kilometers across the mountain along the road in light snow. Hidden under ice and snow the Camino was far too dangerous to even consider. All I saw were a few horses and snowplows. Arrived at Zubiri by one pm which was great time considering the weather! Stayed in the very comfortable Pension Usoa where I have been twice earlier. The kind owner hugged me tightly before she showed me a warm, comfortable room.

Tonight the monastery at Trinidad de Arre is another story. It is freezing! The monk hospitalero who met me at the door was wearing a quilted ski parka and knitted cap with ear flaps resembling a wintery Michelin man.

I am the only pilgrim and not in the summer albergue barn but have a tiny cell behind the altar with blankets but NO heat. Arriving here was difficult for the path was slick with ice. Hopefully I will be able to sleep since the monks have brought me a tiny electric heater. ...Bingo the electricity has just blown! It will be a frigid night so I'll wear my wooly hat, leggings and 2 shirts. Looking forward to the relative warmth of dawn tomorrow.
Last edited: Jan 10, 2021 On this date in February...

On this date in December...