Hi all, we are planning a fall 2021 or spring 2022 camino. I have a couple routes in mind — either the Vasco del Interior to the Frances to the Invierno or the Via de la Plata via Astorga. We have twice served as hospitaleros at Refugio Gaucelmo and want to walk through Rabanal so we can see friends there.

We do not mind walking in colder weather, but would like to avoid extensive snow. We have walked in snow before — we had significant snow over Alto de Perdon on our first camino and walked through a skiff of snow and flurries from Rabanal to past O Cebreiro (in April). That was OK but we really are not up for slogging through accumulated snow if we can avoid it. I should also say that I have lived in the mountains of Idaho so I know how foolish it is to predict mountain weather

All that said, I’m wondering about when regular snow is expected in the Montes de Leon? I assume that before 1 November, snow is not terribly likely and that after 15 November snow is quite likely, but what about between 1 November and 15 November?

Thanks for your collective wisdom!

You may find no snow during the first two weeks of November but it can be very cold and foggy.

However if you do decide on spring 2022 remember March can be rough.

Below is my blog for the famous early March 2009 blizzard.

Be prepared, as always.
Enjoy your planning and Happy Christmas!

Before dawn yesterday morning a continuous brisk noise resounded within the dorm. Could someone be stuffing plastic bags? No, sleet was hitting the roof. The weather had changed, drastically!

Nevertheless we pilgrims set off to cross the mountain. Our path grew more and more slippery. Snow began to fall; pretty at first, then stinging and very cold with an incessant wind. Walking with great difficulty on the snow-covered road after 6k I arrived at the tiny village of Foncebadon. During my first Camino it had been a ruin.

Luckily a private albergue, Monte Irago, has been created and was OPEN. After delicious hot tea and toast Mayte and I decided to stay in this warm and cozy spot. ... Now a full day later the snow outside is deep and still falling and the wind still howling. What a storm! We may be here until the spring thaw! 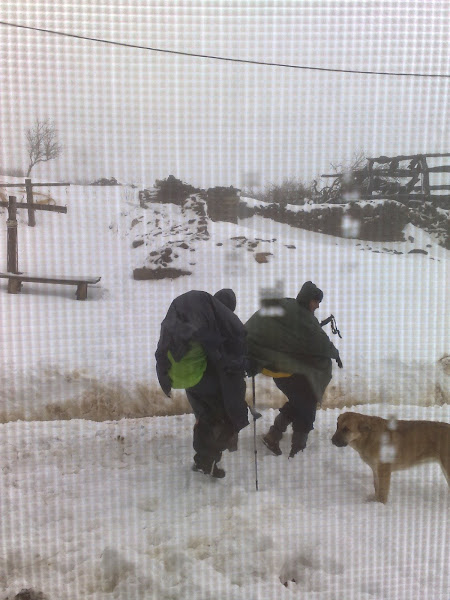 Our third day here has begun. The main room now resembles descriptions of Mt Everest base camp! Several new pilgrims who were stuck at Rabinal have made it here since the storm seems to have broken. Supposedly the road is being plowed so if no change for the worse occurs tomorrow I will try to continue. Outside there are at least 75 centimeters on the ground with much deeper drifts.

Psychologically the mood this morning is a mix of Sartre's No Exit and some 1930's social realism written by Clifford Odets.
Instead of being greatly relieved to find physical warmth, clean beds and good food available in the middle of a snowstorm on the side of a mountain, some pilgrims complain about the prices! Indeed, they are slightly higher than in Astorga but the stuff has to be brought in. 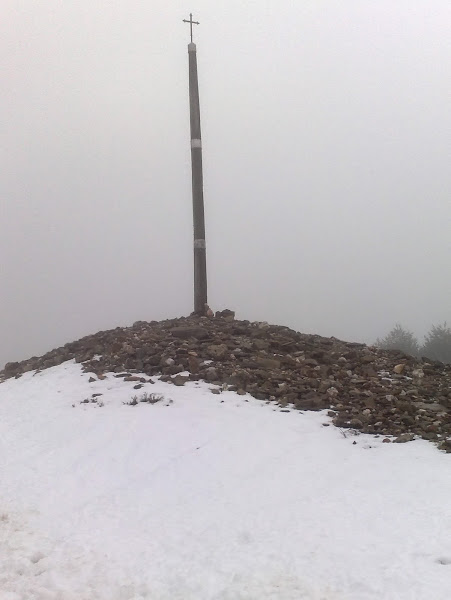 
Today Mayte and I finally left Foncebadon walking up the plowed, dry road to the mythic Cruz de Ferro. Giving thanks for being able to come this far, I tossed a stone carried from our French garden onto the immense pile at the base of the famous iron cross. Pilgrims have made this same gesture since the middle ages; today the scene resembled a medieval landscape painting with deep white snow covering the ground and thick white fog swirling above. ...All seemed timeless.

Now we are in El Acebo, a charming mountain village. Little has been 'gussied up'; much is authentic. Slate from the mountains covers the roofs; second floor porch galleries open onto the single street, the Camino. A friendy bar/restaurant, Meson El Acebo, has an albergue dorm upstairs. Eight other pilgrims are here tonight. Hope the heat works!
Last edited: Dec 21, 2020

Oh wow @mspath! Thanks for the input. That looks like some walk in 2009! If we walk in spring 2022, we will likely walk the VdLP starting mid March, so it would be mid April by the time we got to Astorga —about when we were walking on our first Camino. Your blog is a good cautionary tale in cas we are tempted to start earlier in the year!

Edit — I forgot to add how evocative your blog entries are! Thanks for sharing them and the pics!
Last edited: Dec 21, 2020

Year of past OR future Camino
2017

Spring is likely to be tough, depending on when you plan on starting. I have started off from SJPP at the end of March and the residual snow from Winter was significant. We had to go by way of Valcarlos (yes, for the "legal" reasons!) but even so, we had to walk the road in most of the leg from Valcarlos to Roncesvalles and then again in many spots from there to Zubiri.

I have walked the VDLP in March-April, the Vasco in late October, and the Frances both in March and November. No accumulated snow at all, with generally good weather until Galicia. I think the temperatures are virtually the same, and on average March is sunnier and drier than November. I just don't think that a "typical" difference in weather would be enough to govern your plans.

As is often said weather, ah weather who knows. I walked in November and December and could not go to Rabanal because of a big snowstorm. In Astorga we had to take a bus to Ponferrada. I could have waited a few days but didn't because I had to end by a certain date to meet my daughter. That was later in November. But I will say in early November we had a significant portion of the camino with very, very heavy winds in our faces. There were a few days that the reports said we would have gusts as high as 80 kilometers an hour. I have no idea if it reached that high but it could knock down a smaller peregrino/a. On the Meseta the winds died down somewhat but we had some pretty heavy rains at times. I would say the winds started a few days before Logrono and we rarely had a day that we didn't have to contend with wind, rain or snow either separately or in combination. Lots of people including myself were sick as dogs even though there weren't that many pilgrims. I had bronchial spasms which really slowed me down. But it was still worth it and I would do it again in a second if I could.

Thanks for all this info -- it is very helpful. I have Plans A, B and C for walking a camino in 2021 or 2022. I think Plan A (working at Miraz from 4 Aug through 18 Aug 2021 and then walking the Vasco/Frances/Invierno) is probably unrealistic. I am not over 65, do not have any co-morbidities and am not an essential worker (yea retirement!) so I will be among the last group to get vaccinated... I am holding on to Plan A but I think its a coin toss whether we will be able to travel by 1 August. And Miraz will need to know of our availability to travel in advance of that date also!

So Plan B is to arrive in Spain later, miss volunteering at Miraz, and either walk the Vasco/Frances/Invierno route or walk the Via de la Plata, probably the former. I'm just trying to decide what my drop dead date should be for whether we go forward with plan B or move to Plan C which is to walk the VdLP beginning in late march 2022. I'm not sure what I will decide. The camino is calling!

But it sounds like my gut reaction was correct -- the safest be weatherwise would be to arrive in Santiago around 1 November. We would probably be OK (maybe wet and cold, but only possibly snowy) if we got to Santiago by 15 November. And we probably should definitely bail and go for Plan C if we will be arriving Santiago after 15 November.....

I am enjoying trying to suss out camino plans! Thanks for helping,

Haven't looked through all of this thread but you can't talk about weather months out - you *can* talk about climate. Climate: What you'll get on average. Might be better. Might be worse. Look at:
https://americanpilgrims.org/online-resources/#weather-climate